Department of pharmaceutics graduate students Brian Cicali, M.S., and Tamara King have been awarded fellowships from the Dr. Allen Spiegel Graduate Endowment in Pharmaceutical Research to support their graduate studies at the University of Florida College of Pharmacy. 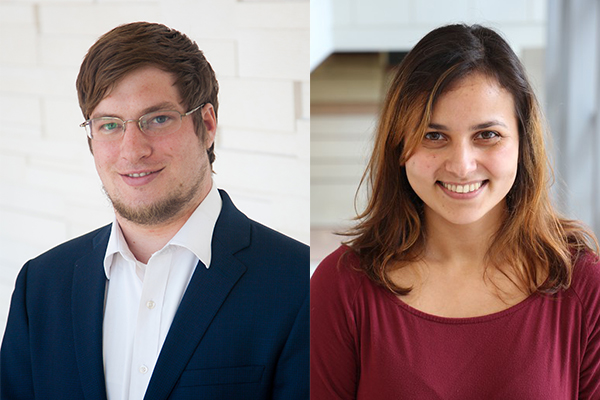 Cicali’s research primarily focuses on using computational modeling to better understand the mechanisms of clinical drug safety and efficacy. His mentor is Stephan Schmidt, Ph.D., F.C.P., an associate professor of pharmaceutics and the Certara Endowed Professor.

“I am extremely honored to have been chosen to be a Spiegel Graduate Fellow and am very grateful to the Spiegel family for making such an honor possible,” said Cicali, a second-year student. “I will continue to work hard to show I am deserving of this award and the value it adds to my graduate education at UF.”

“Being awarded the Spiegel Fellowship provides financial security to focus on my research and writing in the final stages of my doctoral program,” said King, a fifth-year student.

The A.J. Spiegel Foundation pledged $1 million in 2006 to establish the UF College of Pharmacy’s first-ever graduate endowment benefiting students in the department of pharmaceutics. Spiegel earned his Ph.D. in pharmacy from UF in 1957 and retired as senior director of international patents operations from Pfizer Inc., where he worked for 43 years. He also served on the UF College of Pharmacy’s National Advisory Board prior to his death in 2011.