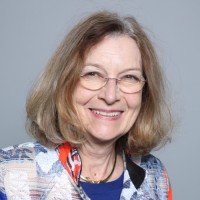 Career and life significantly changed for Kerry Estes in early January 1981 when Hartmut Derendorf, Ph.D. walked into the lab. He had just arrived in Gainesville at UF as a postdoctoral fellow in pharmaceutics and needed to borrow some lab equipment. She was a doctoral student in pharmacodynamics.  Kerry had him write his name, phone number and what he borrowed on the lab blackboard. They discovered love, married, moved to Germany, moved back, had two children and the lab changed.  It was 10 years before anyone erased that note on the blackboard.

After receiving her Ph.D. in pharmacodynamics, Kerry was briefly a Scientific Assistant at the Max-Planck Forschungsgrüppe für Reproduktionsmedizin in Münster, West Germany and then returned to UF as a Postdoctoral Research Associate.  She then joined Pharmatec, Inc. where she was responsible for compiling and submitting Investigational New Drug Application (IND) for a redox chemical delivery system.  She was also Principal Investigator for Small Business Innovation Research Program (SBIR) Phase II grants from NIH to evaluate and develop parenteral formulations based on modified cyclodextrins with awards that totaled $1 million.

Later, Dr. Estes served on the college of pharmacy faculty at Nova Southeastern University as an assistant professor.  During this time, she initiated consulting activities in the pharmaceutical industry. 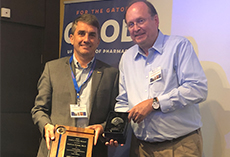 Andreas Kovar, Ph.D., F.C.P., studied Pharmacy at the University of Tübingen, Germany. After receiving his Ph.D., he held there a teaching position in Medicinal Chemistry. Subsequently, he did preclinical and clinical research on PK/PD correlations with a two-year scholarship of the DFG (German Research Foundation) at the University of Florida in Gainesville. In 1997 he joined Merck KGaA where he held various positions in research and clinical drug development such as Global Head Clinical Pharmacokinetics at Merck KGaA, Darmstadt, and Global Head Clinical Pharmacology and Pharmacokinetics for Merck Serono, Geneva; in 2008 he became Vice President, Global Head of Exploratory Medicine, with leadership for Clinical Pharmacology, Pharmacokinetics, Biomarker Strategy and Implementation as well as Modeling and Simulation activities. Since October 2014 he is Assoc. Vice President in the area of Drug Disposition, Safety & Animal Research at Sanofi Aventis. Andreas is an elected member of AGAH’s Board of Regents since 2001 and a co-organizer of the annual PK/PD-Expert Meeting in Germany. In 2007 he became a Fellow of Clinical Pharmacology of the American College of Clinical Pharmacology and serves since 2011 as a member of the Lake Nona Leadership Council of the University of Florida Center for Pharmacometrics and Systems Pharmacology in Orlando. 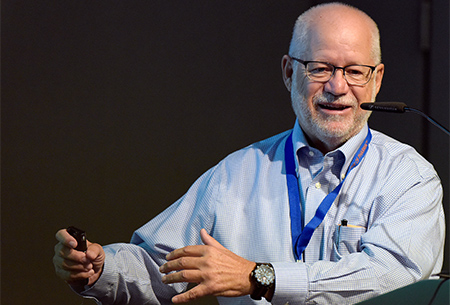 Lawrence J. Lesko, Ph.D., F.C.P. joined the UF Research and Academic Center in Lake Nona (Orlando) in July 2011. Before joining UF, Dr. Lesko worked nearly 20 years in the Food and Drug Administration’s Center for Drug Evaluation and Research as the Director of the Office of Clinical Pharmacology. He was also Chair of the Clinical Pharmacology Coordinating Subcommittee of the FDA’s Medical Policy Coordinating Committee and authored or co-authored numerous Guidance for Industry, and started the FDA’s Voluntary Genomics Data Submission Program and Mechanistic Drug Safety Program. Lesko has published more than 200 peer-reviewed scientific publications and is a frequent invited national and international speaker in clinical pharmacology, personalized medicine, pharmacometrics and systems pharmacology. His research interests include drug development and regulatory science, quantitative clinical pharmacology and pharmacogenomics. 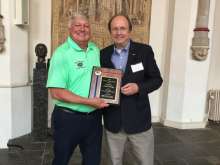 Paul Doering is an emeritus distinguished service professor in the department of pharmacotherapy and translational research at the University of Florida, College of Pharmacy. He is also Co-director of the statewide Drug Information and Pharmacy Resource Center. Doering received his Bachelor of Science in Pharmacy from the University of Florida in 1972 and continued his training at the same institution, earning the Master of Science in Clinical Pharmacy in 1975. Upon graduation, Doering accepted a position in the University’s Department of Medicine as a research assistant where he designed, implemented and evaluated a program of adverse drug reaction monitoring in the obstetric patient.

Doering has strong ties with the practice of pharmacy, having been a practicing pharmacist both in the hospital and community setting. A member of many local, state, and national pharmaceutical societies, he is a past-president of his local pharmacy association. Doering has been recognized four times as Teacher of the Year. In March, 1990, he was awarded Fellowship status in the APhA’s Academy of Pharmacy Practice and Management. In 1993, he received one of two Teaching Incentive Awards given to UF College of Pharmacy faculty. In 1995, Doering was promoted to Distinguished Service Professor, the university’s highest honor awarded to a faculty member, he was the first professor in the College of Pharmacy to be recognized in this way. Dean William Riffee retired in 2013 after 17 years of service and dedication to the College of Pharmacy. His compassion, support, and innovative ideas have given students the education and experience to succeed as Pharmacists. His encouragement for students to get involved with pharmacy organizations outside of the classroom has inspired students to try new learning experiences and has shaped them into leaders. Only the sixth dean in the college’s nearly 90-year history, Riffee came to UF after 21 years on the faculty of the College of Pharmacy at the University of Texas. His first priority at UF was to strengthen its Pharm.D. curriculum by implementing problem-based learning, based on his belief that what student pharmacists learn through their studies is only the beginning of their professional practice. In addition to preparing students, he strongly supported faculty development that allowed the college’s educators to expand their teaching methods beyond traditional approaches.“Dr. Riffee’s service to the UF community in advancing pharmacy education and research is invaluable,” said David S. Guzick, M.D., Ph.D., senior vice president for health affairs and president of the UF&Shands Health System.A pioneer in distance learning, Riffee implemented tele-education programs at multiple campuses at UT, then brought similar technologies to UF. That opened UF’s professional and graduate programs to students across the U.S. and the world. Such globalized programs include the Working Professional Pharm.D. program — the largest in the nation — and expanded master’s programs in forensic science, health policy, pharmaceutical chemistry, clinical toxicology, medication therapy management and clinical pharmacy. From 2001 to 2006, Riffee also served as UF associate provost for distance, continuing and executive education. Dr.Willy Roth studied chemistry and pharmacology at the University of Mainz and held from 1988 until his retirement in 2009 the position as vice president of nonclinical and clinical drug metablism and pharmacokinetics / pharmacodynamics at Boehringer Ingelheim. His responsibilitiny in that area included GLP-bioanalytics, animal ADME work, in vitro and in vivo drug metabolism and drug transport and data evaluation technologies for nonclinical and clinical pharmacokinetic analysis. Dr. Roth was member of Boehringer Ingelheim’s global drug safety committee and European Research and Development Committee. In addition Dr.Roth was during the last decade responsible for the integration of drug development activities in his area including parts of nonclinical drug safety between Japan and Europe and fostered the collaboration with various academic groups in the United States and Japan. Dr.Roth’s expertise lies on the optimization of early drug discovery strategies and efficient execution of drug development work packages under GLP and GCP perspectives. Roth spent a sabbatical in 1981 in Prof.Edward Garrett’s lab at the UF / Gainesville, where he worked on nonlinear pharmacokinetic models. Willy Roth is author of more than 50 publications and 45 oral and poster presentations at international meetings . Dr. Marcus E. Brewster is a Senior Research Fellow and Head of the Department of Drug Delivery Research at the Janssen Research Foundation, Beerse Belgium. He also serves on the faculty of the University of Florida, College of Pharmacy as an Adjunct Associate Professor. He received his BS degree from Mercer University in 1978 and his Ph.D. from the University of Florida in 1982 working with Prof. Nicholas Bodor. Dr. Brewster also spent two years as a Visiting Scientist at the Weizmann Institute of Science in Rehovot, Israel (1996-97). He has published 146 journal articles, written or contributed to over 20 book chapters and proceedings and holds 12 patents. He is an member of several editorial boards and a recipient of the Johnson and Johnson Excellence in Science Award. Dr. Brewster’s main research interests include the use of chemically modified cyclodextrin derivatives for pharmaceutical application, brain-targeted drug delivery through the use of chemical delivery systems and the application of molecular orbital and other computational approaches in addressing items of chemical and biological concern. Dr. Hans Schreier is a founder and CEO of MCS Micro Carrier Systems GmbH, a formulation development company based in Neuss, Germany. He received his dipl. pharm. ETH degree in 1976 and his Dr. sc. nat. degree in 1981 from the Swiss Federal Institute of Technology (ETH) Zurich, Switzerland, followed by postdoctoral training from 1981-1983 at the University of California – San Francisco (UCSF) and a Senior Scientist position at Liposome Technology, Inc., in Menlo Park, California from 1983-1986. During his academic career, he held appointments as Assistant Professor and Associate Professor of Pharmaceutics at the University of Florida College of Pharmacy (1986-1993) and Associate Professor of Medicine at Vanderbilt University School of Medicine (1993-1995). He has been a founder, Director and the Principal Scientist of Advanced Therapies, Inc., a nonviral gene delivery company (1995-1998) and is a co-founder of ARYx Therapeutics, Los Altos Hills, CA, a virtual drug discovery and pharmaceutical development company. He is the Executive Director of Liposome Research Days, Inc., a non-profit organization (since 1994) and co-organizer of the biennial international “Liposome Research Days” conference. He has published over 70 articles, reviews and book chapters and holds several patents. He is the editor of a recent book on ‘Drug Targeting Technology: Physical, Chemical and Biological Methods’ (Marcel Dekker, 2001). He is an Editorial Board member of the Journal of Liposome Research, and a member and elected Governor (1996-1999) of the Controlled Release Society (CRS). He maintains extensive professional links with individuals, companies, agencies and scientific organizations in the US, Europe, Japan, and Australia.